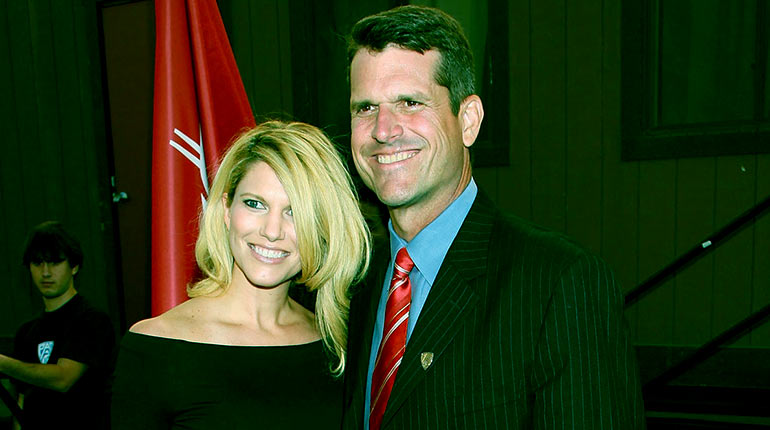 Like most celebrities spouse, Sarah Harbaugh rose to prominence after getting married to NFL coach, Jim Harbaugh who has earned several awards as a player and coach.

Here, we’ ll describe Jim Harbaugh’s wife, Sarah Feuerborn, including her age, parents, family, and marital life. Take a closer look at the profile that we have assembled on Sarah.

Jim Harbaugh’s wife, Sarah has not shared much about her personal life. So far, we only know that Sarah was born on September 20, 1978. Currently 41, she holds American citizenship and is a blond caucasian lady.

Additionally, there is no information regarding her early life and educational background. As per sources, Jim’s wife belongs from a big family and is one of eleven siblings: Mary, Pamela, Andrew, Joseph, Anna, Michael, Marty, Amy, Paul, and John. Reportedly, her family lives in Kansas City, where she spent her childhood.

Affirmative! Sarah Feuerborn isn’t the first wife of Jim. Sarh’s current husband calls her a perfect partner. Additionally, The couple first met back in 2006 at a parking lot in Las Vegas while Jim was at a coaches convention. At the time, she was living and selling real estate in Vegas. 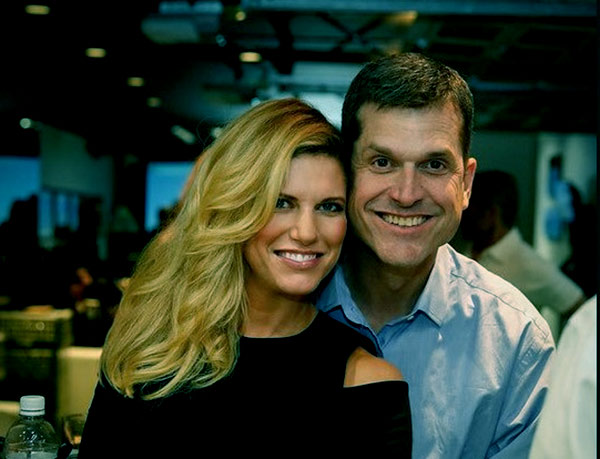 It is said that Jim was still married to his ex-wife while they were dating. Sarah and Jim tied the knot on January 5th, 2008, after dating two years. The duo celebrated their eleven anniversary on January 5, 2019.

Prior to fame, she appeared as a guest on CSN after a 49ers game. In the clip, she talked about her marriage to coach, Jim. She added it is challenging to be a coach wife.

Her husband, Jim Harbaugh, once compared Sarah to Indianapolis quarterback Andrew Luck. Jim said his wife and Andrew have a lot of things in common. He continued, Sarah and Andrew, absolutely perfect the way they were. He felt so lucky to have such a wife.

Do you know how many children does Sarah & Jim Harbaugh have? Well, the loving pair has four children. They are blessed with two sons; Jack and John and two daughters; Addison and Katherine. 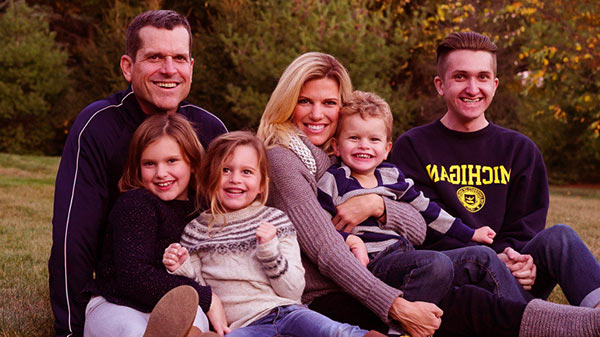 Sarah with her husband and kids

Further, her husband has a trio; Jay, James, and Grace born from his ex-wife, Miah Harbaugh. Jim was married to Miah in 1996 and separated after ten years in 2006. Miah and their three children live in Coronado, California. After the divorce, they are living out of the camera and keeping a low profile.

Currently, Sarah is a real estate agent and worked on a company based in Los Angeles. She has not talked much about her job details. It seems she is enjoying her work.

Additionally, Feuerborn made her appearance in the televisions. She starred as herself in the TV mini-series documentary ‘All or Nothing: The Michigan Wolverines’ and ‘Mike & Mike.’

What is the Net Worth of Sarah Feuerborn?

Being one of the famous coaches wife, Sarah, is enjoying her husband, life and riches, Jim. However, Sarah Feuerborn’s salary and net worth have not revealed to the public.

Nevertheless, Jim Harbaugh makes a salary of $5 million every year and has an estimated net worth of approximately $15 million, as of 2019.

Sarah resides along with her husband Jim, and four children live in a beautiful home. Also, Harbaugh bought the 4650 square foot Coronado Beach House for over $4 million, and now, it’s rented for around $15,000 to $35,000. For its six bedrooms, three and a half bathrooms, a living room and an English kitchen. 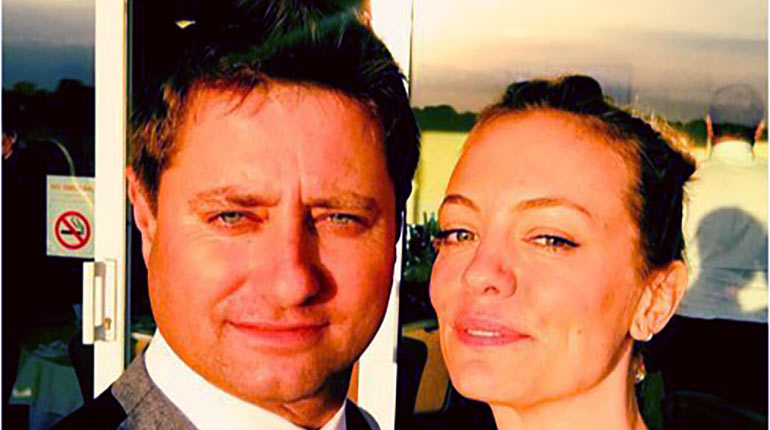